Chicago Continues to Lead the Country in Urban Education

CHICAGO - Building on the district’s reputation as a national leader in urban education, Mayor Emanuel and Chicago Public Schools today released the 2018 Academic Progress Report, an annual comprehensive overview of students’ record-setting academic achievements. By every measure, Chicago’s students across demographic subgroups continue to display unprecedented growth and progress throughout the city. From improved graduation rates to record high elementary math and reading scores to today’s announcement of a record $1.33 billion in scholarships, Chicago students and educators have earned their national reputation – and this report card demonstrates how far they’ve come since 2011.

“Chicago’s record-breaking gains shows that our students, educators, principals, and parents have made huge strides and are working together to build on this momentous academic success for students across the city,” said CPS CEO Dr. Janice K. Jackson. “As a district, we are committed to building upon this progress by continuing to invest in strong academic programs and increasing equity and access to ensure every student in every neighborhood has the high-quality education they deserve." 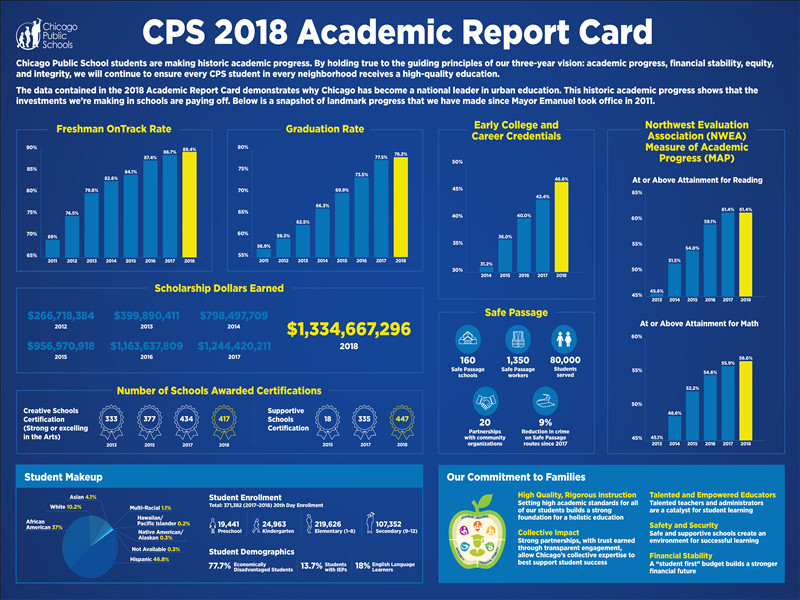 CPS’ detailed plan to build upon this record-breaking progress can be found in the district’s vision statement.