Chicago Public Schools (CPS) does not receive revenues when it pays expenses. As a result, CPS’ cash flow goes through peaks and valleys throughout the year, depending on when revenues and expenditures are received and paid. Further, revenues are generally received later in the fiscal year while expenditures, mostly payroll, are level across the fiscal year––with the exception of debt service and pensions. The timing of these two large payments (debt service and pensions) occurs just before major revenue receipts. These trends in revenues and expenditures put cash flow pressure on the district.

In FY2020, approximately $3.8 billion, or 67 percent of CPS’ current year revenues, excluding non-cash items, were received after February, more than halfway into the fiscal year. The annual debt service payment is made in mid-February, just prior to the receipt of approximately $1.4 billion of the first installment of property tax revenues. The annual Chicago Teachers’ Pension Fund (CTPF) pension payment is made in late June, just before CPS receives approximately $1.3 billion of the second installment of property taxes (which are due August 3, 2020).

Historically, approximately 49 percent of the Chicago Board of Education’s budgeted expenditures are for payroll and associated taxes, withholding, and employee contributions. In addition, the Board’s recurring expenses for educational materials, charter school payments, health care, transportation, facilities, and commodities total approximately 41 percent of the Board’s budgeted expenditures. The timing of these payments is relatively predictable and spread throughout the fiscal year. Approximately 10 percent of budgeted revenues, which flow through the operating account, are comprised of debt service, annual pension payments, and interest on short-term debt.

Most organizations set aside reserves in order to weather the peaks and valleys in cash flow. Board policy requires that the Board maintain an operating reserve of at least five percent of the total operating and debt service budget, and the Government Finance Officers Association (GFOA) recommends reserve levels between five and 15 percent of spending. The Board is in the process of updating its fund balance policy to better align itself with the GFOA recommendations.  As of June 30, 2020, the district projected that the general fund balance totaled $524 million and that CPS has approximately $266 million of cash, with $500 million in short-term borrowing outstanding.

CPS expenditures are largely predictable, and the timing of these expenditures can be broken down into three categories: payroll and vendor, debt service, and pensions. 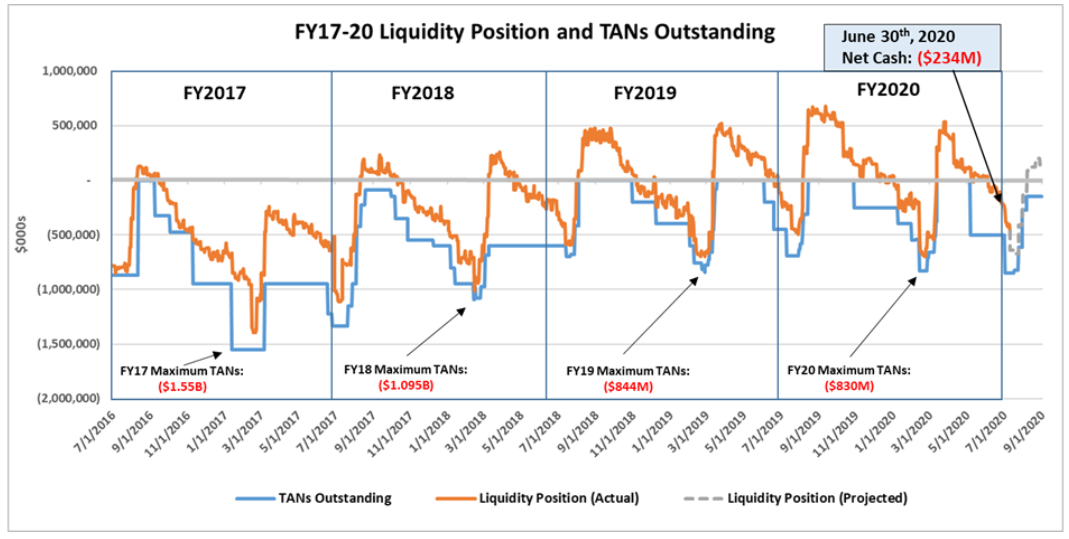