CPS’ Capital Improvement Program, described in the Capital chapter, funds long-term investments that provide our students with a world class education in high-quality learning environments. CPS relies on the issuance of bonds to fund the investments laid out in our Capital Improvement Program, which include roofs, envelopes, and windows; state-of-the-art high school science labs; high-speed internet and digital devices; playgrounds and athletic fields; and expansion of full-day Pre-K and other high-quality programmatic investments. Bonds are debt instruments that are similar to a loan, requiring annual principal and interest payments.

In FY2018, due to advocacy from parents, educators and courageous elected officials from Chicago and throughout the state, the State of Illinois approved Public Act 100-465 (PA 100-465). This created a new funding formula for school districts throughout the state, including CPS. The new Evidence-Based Funding formula (EBF or EBF Formula) replaces the prior General State Aid (GSA) formula. As a result of PA 100-465 and the EBF Formula, most of the outstanding CPS bonds that were previously repaid from GSA revenues will now be paid by EBF revenues going forward.

The EBF formula provides more funding stability for the Board’s fixed costs, including capital, but it is also a major revenue source for core academic priorities. Therefore, CPS can more effectively balance day-to-day classroom needs with the need for quality education facilities.

The Board is authorized by state law to issue notes and bonds and to enter into lease agreements for capital improvement projects.

As with most school districts, CPS issues bonds backed by the full faith and credit of the Board, otherwise known as General Obligation (GO) Bonds. These GO bonds are paid for from all legally available revenues of the Board.

CPS also issues a special type of GO bond called an “Alternate Revenue” GO Bond. These bonds are backed by two revenue sources and offer a number of other bondholder protections.

The first revenue source that is supporting CPS bonds is one of the following: EBF, Personal Property Replacement Taxes (PPRT), revenues derived from intergovernmental agreements with the City of Chicago, property taxes, and federal interest subsidies. The majority of CPS bonds are backed by EBF. In FY2020, approximately $382 million in EBF revenues will be required for debt service, compared to $283 million in FY2019 and $323 million in FY2018. In addition to debt service funded by EBF, $64 million of debt service will be paid from PPRT in FY2020. Debt service paid from PPRT revenues also reduces PPRT revenues available for operating purposes.

The Board is authorized to issue Alternate Revenue Bonds after adopting a resolution and satisfying public notice publication and petition period requirements in lieu of a voter referendum, which is typical in other school districts. The bonds are also supported by the GO pledge of the Board to use all legally available revenues to pay debt service.

The Public Building Commission (PBC), a local government entity which manages construction of schools and other public buildings, has in the past sold bonds which rely on CPS property tax levies. No PBC bonds have been issued since 1999, and CPS will make its’ last PBC bond payment in FY2020 from property tax revenues received in FY2019. The FY2020 budget includes $31 million in payment appropriations for principal and interest on these bonds.

CPS has benefitted from issuing bonds with federal interest subsidies, resulting in a very low cost of borrowing. These include Qualified Zone Academy Bonds (QZABs), which provide capital funding for schools in high poverty areas, Qualified School Construction Bonds (QSCBs), and Build America Bonds (BABs), the latter two created by the American Recovery and Reinvestment Act of 2009 (ARRA). With the expiration of ARRA, new QSCBs and BABs are no longer available, although the federal government continues to pay the interest subsidy to CPS. The FY2020 budget includes $25 million of federal subsidies for debt service.

In FY2016, CPS began levying a Capital Improvement Tax levy to fund capital projects. After the CIT was authorized by the City Council, it generated $45 million in its initial year. In FY2017, CPS sold the first series of dedicated revenue CIT bonds to fund capital projects, with additional issues sold in subsequent years. As of June 30, 2019, CPS has sold three series of CIT bonds, and the total amount of CIT Bonds outstanding is $881 million.

The FY2020 budget includes a CIT levy of $60 million and appropriations of approximately $47 million to pay debt service on these CIT bonds. The CIT bonds are not Alternate Revenue GO bonds. The bonds are limited obligations of the Board payable solely from the CIT levy. As a result of the structure, the CIT bonds received a single “A” bond rating at the initial issuance and have maintained this rating, allowing CPS to achieve a lower borrowing cost.

As part of the Debt Management Policy, CPS is authorized to use a number of tools to manage its debt portfolio including refunding existing debt, issuing fixed or variable-rate bonds, and issuing short-term or long-term debt. These tools are used to manage various types of risks, generate cost savings, address interim cash flow needs, and assist capital asset planning.

Typically, CPS issues long-term fixed-rate bonds, which pay a set interest rate according to a schedule established at the time of debt issuance. However, CPS has also periodically issued long-term bonds with a variable rate structure whereby the interest rates in a short-term mode are established pursuant to a margin over an index for a predetermined amount of time. As of June 30, 2019, 5.2% of the outstanding CPS long-term debt is variable rate, and there are no expirations of their initial periods with these issues. 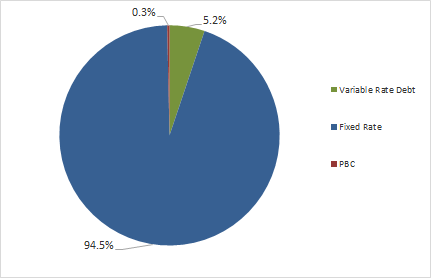 Credit rating agencies are independent entities and their purpose is to give investors or bondholders an indication of the creditworthiness of a government entity. A high credit score can lower the cost of debt issuance, much the same way a strong personal credit score can reduce the interest costs of loans and credit cards. Ratings consist of a letter “grade,” such as A, BBB, BB, or B, and a credit “outlook”, or expectation of the direction of the letter grade. Thus, a “negative outlook” anticipates a downgrade to a lower letter grade, a “stable outlook” means the rating is expected to remain the same, and a “positive outlook” may signal an upgrade to a higher, better rating.

As a result of education funding reform that occurred in FY2018, all rating agencies revised their long-term GO bond rating outlooks on CPS from negative to stable or positive during FY2018 and Fitch Ratings provided a one notch upgrade. Because education funding reform provided the new EBF Formula, an increase in the required State contribution to CPS teachers’ pensions, and the ability for CPS to collect a pension property tax levy, CPS is on much stronger financial footing. In FY2019, CPS received ratings upgrades from Moody’s and Standard and Poor’s.

CPS meets frequently with the credit rating agencies about its budget, audited financial results, debt plan, and management initiatives to ensure the agencies have the most updated information possible. The rating agencies take several factors into account in determining any rating, including management, debt profile, financial results, liquidity, and economic and demographic factors.

In addition to the CPS general obligation bond rating, the CIT bonds – which were first issued in FY2017 as a new and separate credit structure from the existing CPS general obligation credit – contain a separate and distinct credit rating. The CIT credit structure received an investment grade rating from two rating agencies at inception in FY2017. Currently, Fitch Ratings rates the CIT credit “A” Stable and Kroll Bond Rating Agency rated the CIT credit “BBB” Positive.

CPS will continue to issue Tax Anticipation Notes (TANs) in FY2020 to cover operating cash flow needs, which are repaid from property taxes.

As shown in the table below, FY2020 includes total appropriations of approximately $700 million for alternate bonds, CIT Bonds, and PBC payments.

CPS is required to set aside debt service a year in advance for EBF-funded debt and one-and-a-half years in advance for PPRT and CIT bond-funded debt service. The FY2020 revenues shown for the debt service funds will be set aside for these future debt payments, which are required by bond indentures to be held in trust with an independent trustee. PPRT, used to pay Alternate Revenue bonds, is deposited directly from the State to a trustee; and the capital improvement tax levy, used to pay CIT bonds, is deposited directly from Cook County to a trustee. Because of this set-aside requirement, the majority of the appropriations for FY2020 will be paid from revenues set aside in FY2019. Table 1 provides information on the debt service fund balance at the beginning of the year, the expenditures that are made from the debt service fund, and the revenues that largely fund the debt service requirements for the following fiscal year.

The following graph illustrates CPS’ debt obligations on outstanding bonds as of June 30, 2019. This graph does not show the impact of any future bonds required to support future capital budgets or debt restructuring. 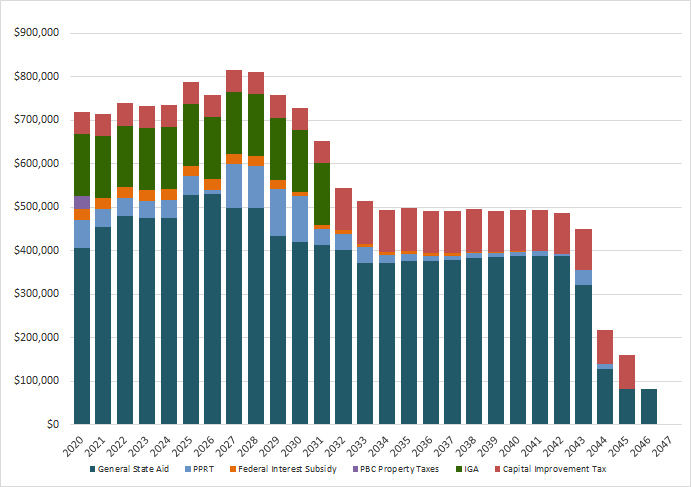 Note: Does not include future long-term bond financings or current and future short-term financings

External stakeholders such as taxpayers, employees, parents, government watchdog groups, rating agencies, and bondholders frequently review CPS’ debt profile to gauge its size and structure as a crucial component of CPS’ financial position. In addition to evaluating the total amount of debt outstanding and the annual debt service payments, external stakeholders also look at the “debt burden” to gauge how much taxpayers bear in debt costs and determine how much debt is affordable for residents, which establishes true debt capacity. Several methods of measuring debt burden are commonly employed for school districts, including comparing existing debt to legal debt limits, measuring debt per capita, and measuring debt as a percentage of operating expenditures.

The Illinois School Code imposes a statutory limit of 13.8 percent on the ratio of the total outstanding property tax-supported debt a school district may borrow compared with a school district’s equalized assessed value, which generally represents a fraction of total property value in the district. Because the Board has issued alternate revenue bonds for which property tax levies are not extended, these bonds do not count against the legal debt limit imposed by the Illinois School Code. Therefore, total property tax supported debt is extremely low, at less than one percent of the legal debt limit.

The Board’s per capita debt burden, or total debt divided by the City of Chicago’s population, has increased in the last decade. As reported in the FY2018 Comprehensive Annual Financial Report, General Obligation debt per capita is $2,680. This is still considered moderate to slightly above average relative to other comparable school districts. The Debt Management Policy is available at the Board’s website at policy.cps.edu.

Note: Table is based on budgeted debt service requirements to be deposited within each fiscal year. Excludes issues completed after June 30, 2019 and any future anticipated transactions which were included in the FY2020 budget.

Note: Excludes issues completed after June 30, 2019 and any future anticipated transactions which were included in the FY2020 budget.