Growing pension costs shouldered by CPS and the city’s taxpayers have long represented the greatest budgetary risk to the district. However, that risk has now been significantly mitigated thanks to the identification of local revenue sources that are dedicated to pension costs and the state of Illinois taking meaningful steps toward righting inequitable funding structures that stretch back for decades. Though CPS remains the only district in the state to fund its own pension costs, there is now a path forward to ensure past and current pension liabilities are covered and do not imperil CPS’ future ability to invest in its students.

CPS teachers are part of the Chicago Teachers’ Pension Fund (CTPF), which historically has been funded entirely by Chicago taxpayers with little support — until recently — from the state. CPS is the only school district in the state with its own teachers’ pension system, which is separate from the statewide Teachers’ Retirement System (TRS). Under this arrangement, Chicago taxpayers have faced the unique burden of having to support both the CTPF and the TRS. Like all other working Illinoisans, their income, corporate, and sales taxes pay for TRS costs, but Chicagoans alone support the CTPF through property taxes and other local revenue streams.

As part of education funding reform, the state has begun to address this long-standing inequity. Beginning in FY2018, the state has contributed funding in the amount of CPS teacher pension normal costs (i.e., the cost of the benefits that are projected to be created in the current year). In addition, the state reinstated a CPS teacher pension property tax levy in FY2017 that is appropriated exclusively for paying CTPF costs. Today and moving forward, a 0.567% maximum levy on the adjusted Equalized Assessed Value (EAV)1 of Chicago properties is dedicated to covering CPS’ statutory obligations to the CTPF.

In FY2020, per the CTPF’s 2018 actuarial report2, the total required employer contribution to the CTPF will be $854.5 million. Of that number, the state will pay $257.3 million (comprising the projected normal cost and 0.544% of the CTPF’s total payroll, pursuant to Public Act 90-0655) and the reinstated pension levy is projected to raise $477.1 million. Other operating revenues will contribute toward the remaining $120.0 million. This constitutes an $18.5 million decrease in pension costs diverted from operating funds compared to FY2019. More details on the breakdown of FY2020 employer costs can be found in the footnoted CTPF actuarial report.

With these FY2020 payments, the funded ratio of the CTPF based on the actuarial value of assets is projected to decline to 47.85% in 2018, down from 50.10% from 2017. This decline is attributable to a decrease in the assumption of returns from investments to 7.00% from 7.25%. This, together with other changes in actuarial assumptions, increased the actuarial accrued liability of the CTPF by $622 million in 2018.

The passage of state education funding reform in 2017 began to address a pension system that unfairly penalized Chicagoans.

Even though both the CTPF and TRS are governed by state statute, there has been a vast difference in the source of funding for both pension systems. With the state of Illinois projected to pay $245.5 million in FY2020 for teacher pension normal costs, CPS is still on the hook for approximately 71% of the statutorily required employer contribution. In contrast, per the statutory funding plan, other individual school districts in Illinois are projected to only pay $87 million of the $4.9 billion total employer contribution to the TRS in FY2020, 2% of the total.3

In FY2019, the state’s estimated contribution to TRS is $4,353 million, per the latest TRS actuarial report. This amounts to a pension contribution for downstate and suburban school districts of $2,723 per student, while CPS only received $661 per student (Chart 1). Before the state began to pick up the normal cost in FY2018, the disparity between Chicago and all other school districts in Illinois was significantly larger. 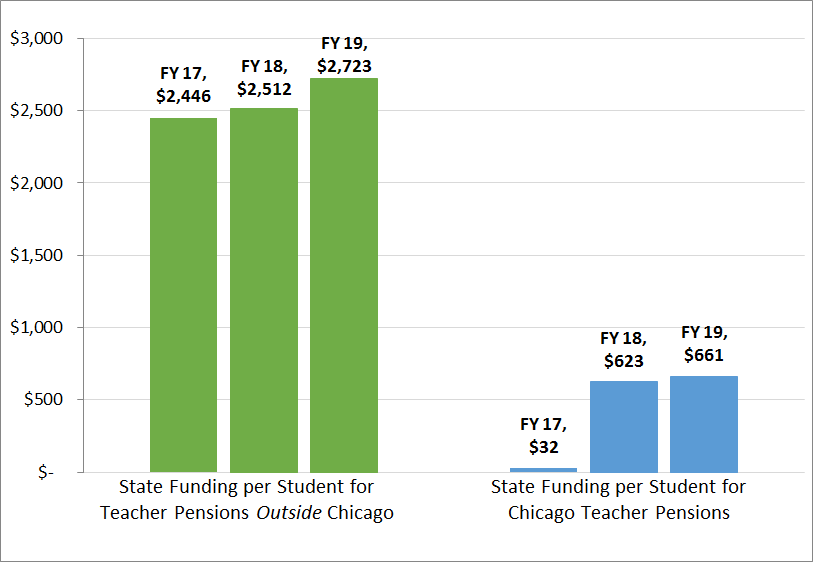 CPS teachers and other employees with teaching certificates (e.g., principals) participate in the CTPF.

CPS is required to make an annual employer contribution to CTPF, based on an actuarial calculation, such that the “funded ratio” of assets to liabilities in the Fund is 90% by 2059. This ramp between the present day and 2059 is enshrined in State Law, with Public Act 96-0889.

By statute, CPS is allowed to offset its contribution with funding the state contributes to the pension fund. Currently, funding includes the pension levy, state normal cost funding, state additional contributions equal to 0.544% of payroll, and diversions from other operating revenues, as shown in Chart 2. 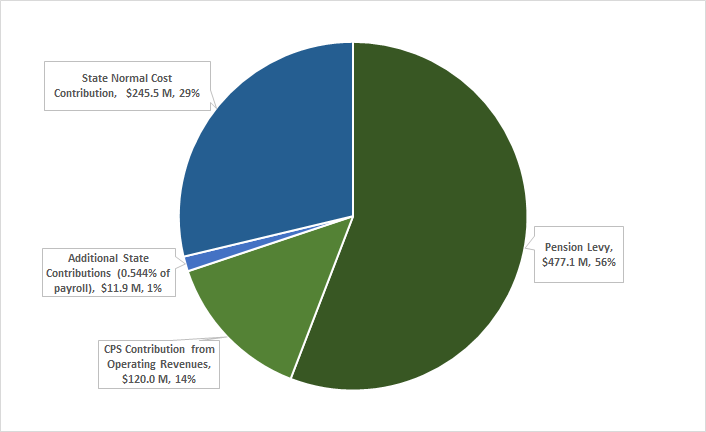 In FY2020, CPS is projected to contribute $597.2 million for Chicago pensions out of its own resources, with the state picking up the other $257.3 million. Of the $257.3 million in state funding, $245.5 million is for CTPF normal cost, and $11.9 million is for “additional” state contributions. These “additional” state contributions are statutorily required to offset the portion of the cost of benefit increases enacted under Public Act 90-0582, and are calculated as 0.544% of the Fund’s total teacher payroll.

Revenues from the pension levy make up the majority of CPS’ contribution to the CTPF, estimated at $477.1 million in FY2020. The pension levy was reinstated in FY2017 as part of pension reform at an initial flat rate of 0.383% of Equalized Assessed Value (EAV), which increased to the current 0.567% rate in FY2018.

In FY2019, the flat 0.567% rate-limited levy works out to a lower effective rate of 0.511% because the property tax code states that any rate-limited levy be applied to the prior year’s base property value and the current year’s new property value. Because Chicago’s valuations have increased by upwards of 11% from 2017 to 2018, relying on last year’s property values has the effect of driving down the effective tax rate from 0.567% to 0.511% of EAV. This creates a lag for the individual property owner, whereby a single-year increase in property tax value does not immediately translate into higher property tax costs, but instead only takes effect a year later.

Projected continued growth in Chicago’s property value from 2019 onwards means that the pension levy will generate more revenue in future fiscal years, decreasing diversions from operating revenues that could otherwise be spent directly on investments in Chicago’s children. In FY2020, diversions from operating revenues are projected to decline from $138.6 million to $120.0 million.

Based on the CTPF’s 2018 actuarial report and an assumption of approximately 8% growth in property values in assessment years and 2% growth in non-assessment years, CPS is on track to have no diversions from other operating revenues by FY2032. Although this represents an improvement from recent years, during which diversions from operating revenues peaked at $675.9 million in FY2016, the costs associated with paying for CTPF contributions will continue to be significant for the foreseeable future.

Chart 3: Diversions from Operating Revenues are Projected to Continue until 2032 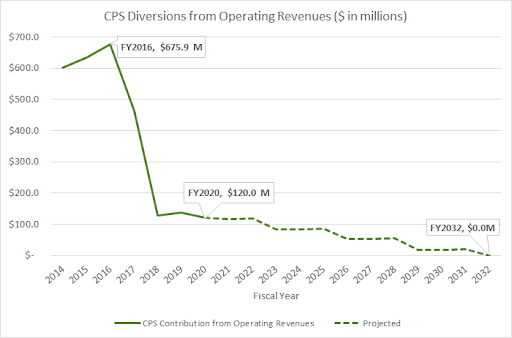 Pension Contributions by the State and by Individual Employees

As the total employer contribution costs continue to increase in accordance with the actuarially required amount to reach a 90% funding ratio of CTPF by 2059, state contributions will shrink as a total share of the overall revenues used to cover this cost, if limited to just the normal cost and the “additional” 0.544% of payroll. In FY2019, the state’s share of CTPF costs was 29.5%, and this is scheduled to decline to 11.6% by 2059 if there is no further expansion of the CTPF’s employer cost assumed by the state. The normal cost borne by the state will gradually decline as a greater share of the workforce covered by CTPF comprises “Tier II” teachers who are entitled to a lower level of benefits. CPS is reliant on the state continuing to add funding to the Evidence Based Funding (EBF) model so that future pension costs do not prohibit us from investing in students and schools.

Chart 4: The State Share of CTPF Costs will Shrink in Future Years 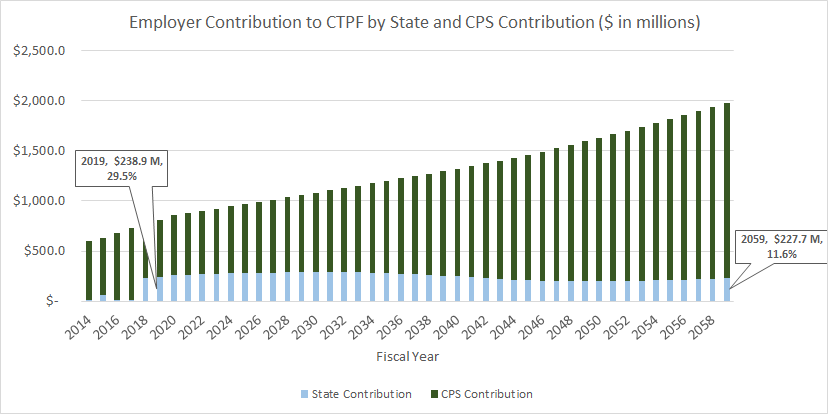 At the individual level, employees covered by CTPF are required by statute to contribute 9% of their salary to pensions (“employee contribution”). However, from 1981 through 2017, CPS paid the first 7% on the employee’s behalf in addition to its own employer contribution. Under the 2015-19 Collective Bargaining Agreement with the Chicago Teachers Union, CPS no longer pays 7% for “Tier II” employees hired on or after January 1, 2017. 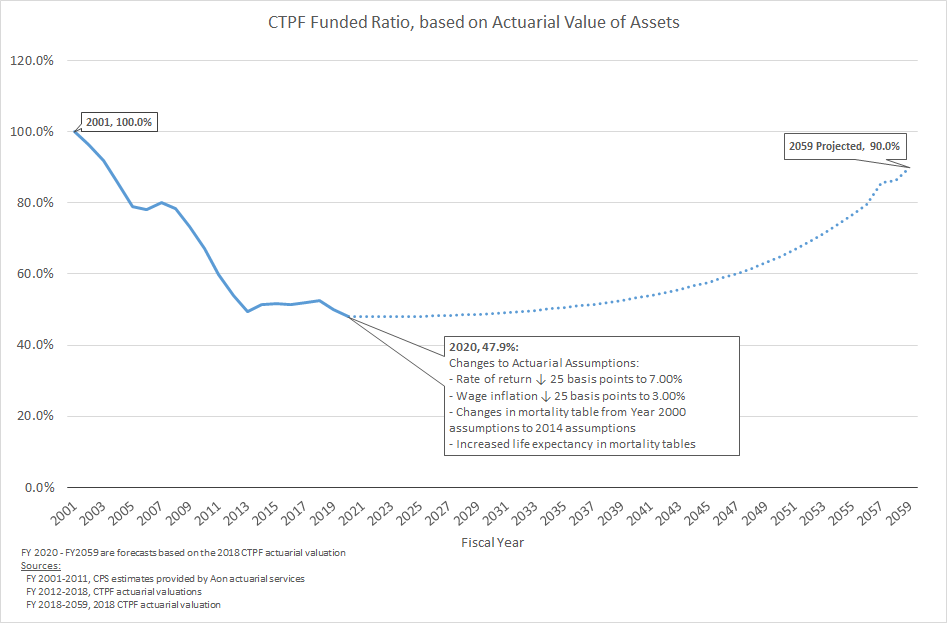 For the FY2018 CTPF valuation, the fund made a series of changes which negatively impacted the funded ratio and grew the Unfunded Actuarial Accrued Liability (UAAL). Those changes include:

This negatively builds upon an approximate return on actuarial value of assets of 5.84%, lower than the assumed rate of return of 7.25%. As such, the certified CPS employer contributions for FY2020 is $597.2 million, $6 million higher than the prior year’s FY2020 projection of $590.9 million, reflecting an increase in the actuarial accrued liability of the CTPF by $622 million.

Pension contribution costs borne by CPS will continue to grow until 2059. The state’s assumption of the normal cost since FY2017 will not fully fund the rising total costs of pension contributions because the normal cost is projected to decline as a share of the total employer cost. The pension levy, if assumed to stay flat at 0.567% of a property’s value, should eventually help pay for CPS’ entire share of the pension costs. However, long-term fiscal stability is still predicated upon the state lessening the tax burden placed on Chicagoans by fully funding the EBF model, which will provide additional resources to CPS and other school districts that primarily educate low-income students. More discussion on the state’s EBF formula can be found in the Revenue chapter of the Budget Book.

Chart 6: CPS Employer Pension Contributions Will Continue to Grow Every Year, With the Majority Covered by the Reinstated Pension Levy